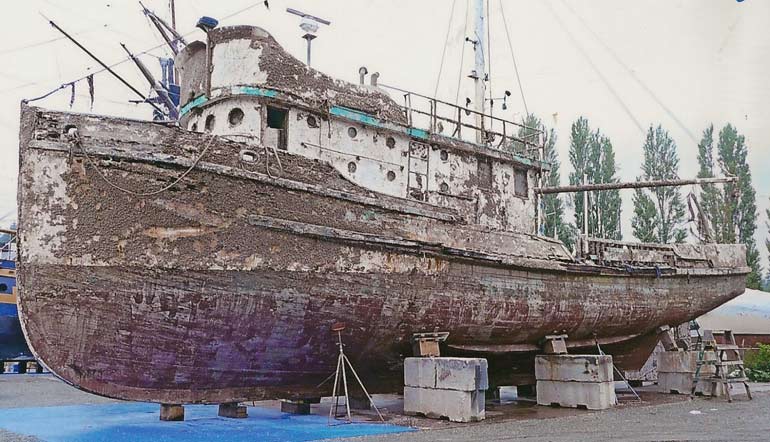 The Western Flyer – an historic boat once used by author John Steinbeck, is currently being restored at the Port of Port Townsend Boat Haven, after a year underwater and an uncertain future.

The 72-foot vessel was built by Tacoma’s Western Boat Building Co. in 1937. In 1940, the seiner was chartered in Monterey, California, by American literary giant John Steinbeck and his friend Ed “Doc” Ricketts for a six-week biological collecting expedition that was the subject of Steinbeck’s 1951 book, “The Log from the Sea of Cortez.”

The boat’s new owner, John Gregg of California, decided to do the restoration work in Port Townsend, after visiting the area:

“Guys were working with hand tools and caulking boats – there is just a lot of local knowledge there that I don’t think is duplicated anywhere else on the West Coast. So I realized right away that that boat had to stay there.”

Mark Stout of Scow Bay Boats of Port Townsend, is overseeing the project, and will draw from the local talent pool to conduct the repairs.

Once the 2 year, $2 million restoration is completed, Gregg plans to sail the boat to Monterey Bay in California for use as an educational center.

Read more about the renovation: