Doug Lockhart Retires After 31 Years at the Port 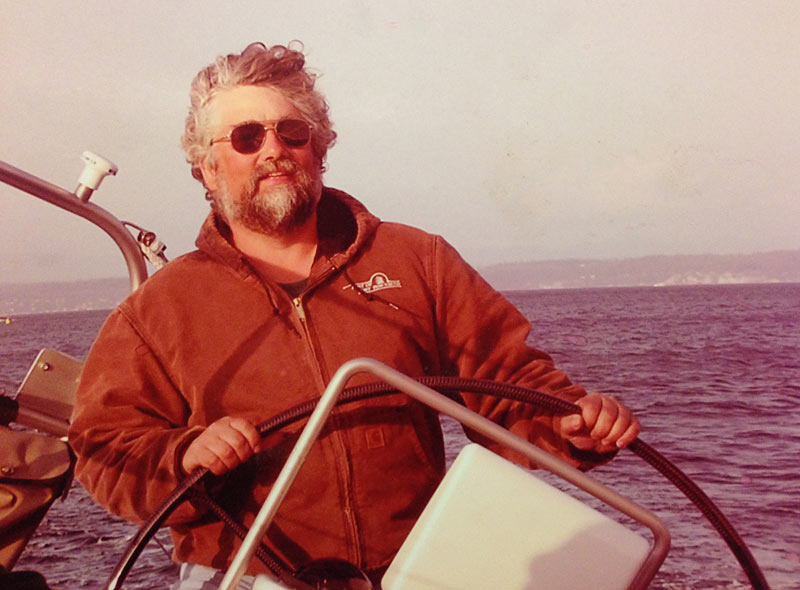 After a nearly 31 year career at the Port of Port Townsend, Doug Lockhart is preparing to make his final haul out as Hoist & Yard Manager, retiring at the end of February.

The Port Townsend native got his start in the marine trades with Skookum Marine, building decks and working on bodywork on fiberglass boats. As Skookum’s business began to wind down, Doug learned of an opening at the Port.

Back then, the hiring process was extensive:

“Gus (Gustafson – The Port’s harbormaster) threw the application at me and said ‘you’re hired!’”

Doug’s first job was cleaning up blocks in the yard used to launch boats. His future success was foretold when he accomplished this work in a short period of time.

“I came back go Gus and said ‘I’m done.’ He looked at me and said ‘Huh. You were supposed to take longer to do that.’”

Doug quickly learned how to operate the 40 and 60 travel lifts that the Port used for haulouts, and he never looked back. For much of the past 30 years, Doug has served as Hoist and Yard Manager – work that grew more complex with the acquisition of the 300 ton, heavy haulout.

“There is a lot of pride you feel when you pick up one of these big boats. When Townsend Bay Marine finished one of their large yachts, it felt good watching the big crowd show up to see that haulout.”

Other than the heavy haulout, when asked what has changed the most in 30 years, Doug points to environmental changes.

When he first started, vessel wash downs were performed on the haulout, directly over the water. After pressure spraying the vessels, workers would just shovel the residue into the harbor. In the yards, there was open grinding, and workers could do a lot of their work without . Now, workers use vacuum sanders, and do work over tarps to contain contaminants. Of course, stormwater management has also changed enormously.

“The environmental changes have been huge – 900% better than when I started. It’s just a night and day difference.”

Another change? 30 years ago, the yards were fenced and locked. “We’d lock it up and chase everyone out.” Now, thanks to the growth of the Port and businesses, the yard is open 24 hours a day.

“This yard is feeding a lot of families.”

Doug figures he’s hauled out hundreds, if not thousands of boats in his career. His most difficult haulout? YTB Naval Tugs.

“They are phasing them out now, but they pretty much max out the 300 ton lift. They are 30 ft. 9 inches wide, and the notch is 31 feet 2 inches. You are sliding the slings along and dragging them to get them in. When you go to put them down at that weight, you have to put more blocks down, covering almost every inch of the keel. One time, they brought one of those boats in, and converted it from a single to a double screw vessel. That changed the weight and we couldn’t get the bow off of the ground. They had to take a bunch of weight off to get that boat back in the water.

As Doug contemplates retirement, he says the thing he will miss most? The people.

“I enjoy the people. There a lot of great people in the yard.”

Doug is looking forward to working on a lot of home projects, and spending more time chasing crab, clams and fish. In particular, he is anticipating getting to work on a runabout that’s waited 28 years for repairs.