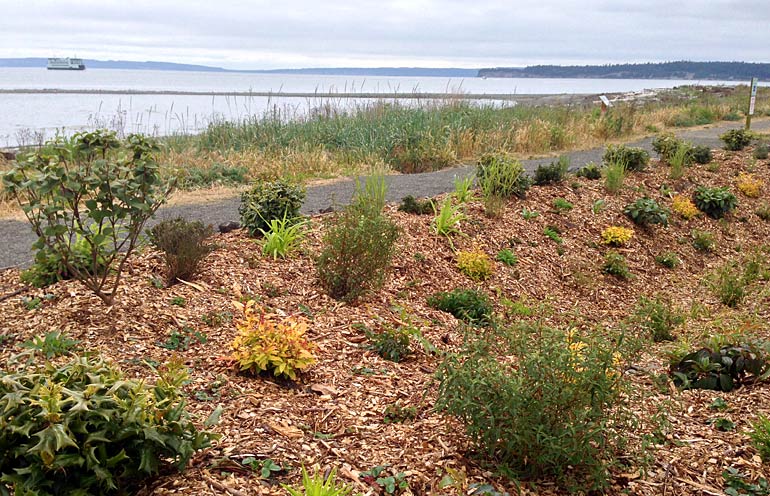 Why construct a rain garden? Over the past few years, the intersection of Jefferson and Hudson streets has seen increasing amounts of roadway flooding, as the existing stormwater drainage system began to plug up with sediment. The Port explored a variety of solutions prior to connecting with Simmons, who worked on water quality issues for 20 years in the South Puget Sound area, before moving to Port Townsend last year.

The rain garden consists of two basins that are designed to facilitate drainage from rain events, and to remove contaminants as the water soaks into the ground through a special soil mix (60% sand, 40% compost). The garden will effectively filter out heavy metals, oils, greases, and harmful bacteria from sources such as vehicles and pet waste running off the area. The garden will drain about an acre of paved area, along the waterfront at Point Hudson.

The existing soils, combined with the special soil mix, facilitate rapid drainage and filtering. According to Simmons, there should only be up to 6 inches of standing water in the rain garden for less than 30 hrs – if we get a very large rain fall event – up to 3 inches in 24 hours.  To put that in context, Port Townsend typically gets 19 inches per year total, and a 1 inch storm is considered a heavy rain fall event.

According to Aase, constructing a rain garden was a much more cost effective – an aesthetically pleasing – solution than a traditional storm water management approach that would have involved installing a lot of pipes and other infrastructure.

Over 1300 plants were installed by volunteers over the two days.  The plants were selected by Erica Guttman of WSU, who also oversaw their installation. These included groundcovers of coastal strawberry and creeping raspberry, wet loving plants such as purple iris, sedges, red osier dogwood, some moderate water lovers such as spirea, and then some more drought tolerant plants around the upper parts, such as Oregon Grape, dwarf pine, ornamental grasses and red flowering currant. These plants were selected for their salt tolerance and hardiness for this area.

The project served as a great community learning activity about rain gardens.  WSU hosted an educational workshop and then had volunteers come do some hands on learning as part of the installation.  Community participants included sixth grade students from Swan School, (whom Emily Biskup organized as part of her 6th grade capstone project), 4-H after-school students, WSU Master Gardener Volunteers, and WSU Beach Naturalist Volunteers, as well as other community members.

The Port paid for the plants, provided the excavation, soil mix, mulch, rock placement etc.  They also paid for Erica Guttman’s work on the plant design and management of the installation of the plants by the volunteers. WSU paid for Bob Simmons’ time on the project, since he coordinated it with his educational efforts to reduce stormwater contamination of area waters.

“From my perspective the Port was excellent to work with, a true collaboration.  The on-the-ground Port Staff – Charlie and Johnny – put a lot of sweat into this project and were truly professional. Larry led this effort for the Port, providing great input and making sure we all had we needed to get the project done.” – Bob Simmons, WSU.

Simmons will continue to monitor the rain garden, ensuring that it receives adequate irrigation through this first summer as the plants get established.  In the long term it should not require supplemental irrigation.

Simmons hopes that the project will also serve a public education function, demonstrating what a rain garden looks like and does.

“Rain gardens are highly effective in reducing run-off, which in turn helps protect water quality in our area. If individuals or neighborhoods have run-off issues on their properties, I’m eager to work with them to help design solutions that benefit the entire community.” – Bob Simmons, WSU.