Who are the Port’s New & Promoted Employees?

Key retirements have prompted the Port to reorganize much of its staff and to welcome several new employees. The reorganization has Chris Sparks taking charge of both the Maintenance and the Yard crews as the new Operations Manager.  Kristian Ferrero is the new Harbormaster, in charge of customer service by the moorage office crews. Kimberlie Webber is the new Environmental Specialist, taking over from Terry Taylor who is retiring. 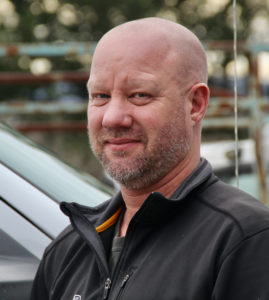 Chris Sparks, the Port of Port Townsend’s new Operations Manager, has his hand on almost everything at the Port that moves.
Sparks, 46, is at the lead of a Port staff reorganization that brings together for the first time in decades, the Maintenance crew and the Yard crew. Since 2018, Sparks has been the Port’s Maintenance Manager, overseeing the work of a crew that grew to nine. With this reorganization, about 16 Port employees who are outside moving boats or doing construction and maintenance are under his guidance. That’s about half the Port’s staff.

The result, Sparks expects, is that staff will be able to share the workload when it spikes in one part of the operation or the other.
“If, say, the Yard doesn’t have a lot going on, we can move people over to help Maintenance,” said Sparks. “Or if the Yard is busy, we can get some help from Maintenance. It can bring a team aspect, where everyone is helping everyone out.”

The timing of the reorganization is good, Sparks said.
“We have a lot of capital projects in the works,” he said. “There’s plenty to do.”
One of Sparks’ focuses is to make sure boats are moving onto and out of the Boat Yard, because that keeps the marine trades busy.

Sparks comes to his new expanded position with varied experience.
Born and raised in California, he’s lived in Sequim since 2000. In Clallam County he was a house painter, a general contractor, an assistant manager at the Home Depot, and worked at Westport Marine in Port Angeles, where he ran the lamination department. During some of those years, he also baked donuts for his own company, “Hooked on Donuts.”
“I baked donuts by night and painted during the day,” he said.

When Larry Aase retired as the Port’s Maintenance Manager in 2018, Sparks took the job.
His recent promotion to Operations Manager has resulted in other promotions of longtime Port employees. Sean Smith has become the Lead of the Yard crew, which operates the three Marine Travelifts. David K. Johnson is now the Lead of the Maintenance crew. Another part of the reorganization put all of the customer service staff in the moorage offices under new Harbormaster Kristian Ferrero.

Sparks lives in Sequim with wife Chelsie and three daughters ranging in age from 5 to 17. 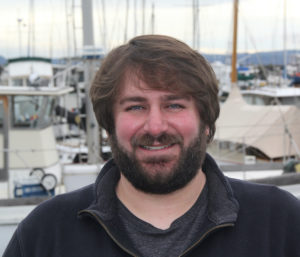 For Kristian Ferrero, it’s all about customer service.
Ferrero, a Port of Port Townsend employee since 2014, was recently named the Port’s Harbormaster. That puts him charge of the Port’s moorage offices at all three marinas – Boat Haven, Point Hudson and Quilcene.

His staff of seven includes all of the front-line customer service representatives who deal on a daily basis with the boating and RV-ing public.
“We are the front face of the Port,” he said. “We want our customers to have a positive experience, and for the systems to work fluidly.” A favorite way of expressing this, Ferrero said, is “back to basics. We’ll delve into the parts that are outdated and come up with different routes to try,” to make sure customers are happy.

With his promotion to Harbormaster, several other promotions within the moorage offices followed. What Ferrero calls ‘team captains’ for each of the moorage offices were named: Brittany Bolling for Boat Haven, Jennifer Mitchell for Point Hudson and Shannon Meehan for the Yard. Michelle Dew has primary responsibility for Quilcene’s Herb Beck Marina.  Kelsey Seiler and Chuck Fauls round out the customer service staff, with one position open.
“It’s a great core team of people,” he said. In fact, one of Ferrero’s goals is to have his staff be more visible on the docks so they can interact with boaters beyond just getting assigned a slip or a haul-out.

“I encourage any and all conversations with people,” said the sociable Ferrero.
Ferrero grew up in Edmonds. He spent time at WSU, where he met his future wife, Danielle. His parents have property at Cape George, so Kristian moved there when he joined the Port as yard laborer in 2014. Danielle arrived in 2016 when they got married.

He was promoted over time, operating the lifts and getting things done in the yard, before an injury brought him into the Boat Haven moorage office.
That customer-oriented role turned out to be a good fit, and he was promoted into a lead position. His promotion to Harbormaster came on Jan. 15.
Danielle works in the accounting office of the Port Townsend School district and is also assistant girls’ basketball coach for the East Jefferson Rivals. 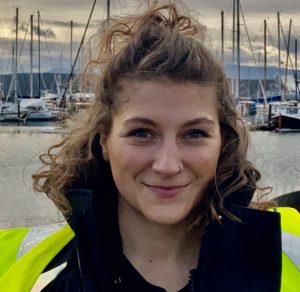 When boaters at the Port of Port Townsend see the Port’s new environmental specialist walking around, they may well recognize her.

Kimberlie Webber, 31, graduated from Port Townsend High School in 2009 and has held various jobs in the county since then. That includes her time at Pet Town and as a cook and server at the Hudson Point Café.

Most relevant to her new job with the Port, however, was her work as a salmon surveyor, habitat restoration specialist and office manager of the Northwest Watershed Institute, for whom she did salmon spawning surveys, removed creek barriers and planted new trees in the watershed flowing into Dabob Bay. She worked there from 2019 until recently.
Her college education also fits that interest. She’s about to obtain a degree in Fisheries and Wildlife Sciences from Oregon State University. She obtained her Associate of Science degree from Peninsula College.
“I knew I wanted to work in environmental management,” said the 31-year-old.

In her new role with the Port, Webber is responsible for ensuring that work done on boats, whether on the land or in the water, complies with environmental regulations designed to protect the marine environment. She’ll be a visible presence in the Boat Yard and on the docks at the Port’s marinas.
“I see myself as an educator working closely with people whose livelihoods are based in the boat yards,” she said. “I want to work with them so that we can keep the Port open and healthy for everyone.”

Because Port facilities are closely monitored by the state Department of Ecology and must have permits to remain open, Webber’s work is ultimately designed to keep the marinas and boat yards open for everyone.

That includes ensuring that best practices are followed on boats already in the water, and likewise are followed when boats are being worked on in the yard. Among other things, DOE monitors the level of pollutants carried from the yards to the Port’s stormwater system before that water is released into Port Townsend Bay.

While that makes her responsible to take steps when she sees risky actions, she also wants to congratulate boaters and workers when she sees them doing things the right way.

“I see my role as letting people know why they should want to comply with our standards,” she said.