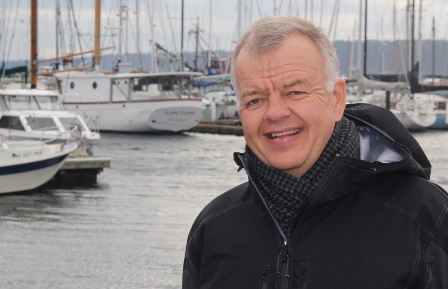 For immediate release
Nov. 27, 2018
Headline: Toews named Port of Port Townsend’s deputy director
– – –
Old-timers in Port Townsend remember there once was a dairy farm on the bluff
overlooking the bay at the south end of Sheridan Avenue near Jefferson General
and where the Eisenbeis Hotel once stood. The farmers were Cal Thompson and
his family.
His grandson, Eric Toews, was recently named the new Deputy Director of the
Port of Port Townsend by Port Interim Executive Director Jim Pivarnik.
Toews, 56, is not new to the Port. He’s worked for years on important Port
projects, doing planning and legal groundwork that makes him intimately
familiar with Port operations and challenges.
His devotion to the Port is deep-seated.
“Look at how Jefferson County and Port Townsend have changed over the last
20 years, trending towards a retirement residential community,” he said. “Being
at the Port is the most direct route to sustaining and building upon the vision of
retaining an authentic working waterfront long into the future. I want to do all I
can to achieve that working waterfront vision.”
Pivarnik said he’s glad to be working with Toews.
“I’ve worked with Eric for the last eight years through a number of projects and
plans,” he said. “His work is always thoughtful, accurate, and on point. He has
been the glue that has held this Port together for the last few years and I for one
really appreciate that.”
Toews (the Dutch name is pronounced “Taves”) grew up in central California.
But he visited the farm in Port Townsend frequently and was determined to
move to the Northwest. After graduating from Pacific Union College and later
from the Willamette University School of Law, he and his wife Mary (manager of
the Uptown Dental Clinic), made good on that in 1990. They moved to Jefferson
County and raised their daughter Natalie here, setting her on her present course
towards a graduate program in human evolutionary biology.
Over the past three decades, Toews has quietly been an architect for a range of
land and shoreline policies and regulations in Jefferson County and Port
Townsend. Combining his legal training with land use planning, he worked
inside county and then city government to help craft the comprehensive plans
and implementing regulations called for by the Growth Management Act in the
early 1990s.
That led him to contract work with the Port of Port Townsend on its first
Strategic Plan in 2010. The small consulting firm he then operated with Dave
Robison was also a Port tenant, its office in the same Point Hudson building then
occupied by Port Administration.
The Port came to increasingly rely on Toews for planning and in-house legal
work around contracts, leases, and grants, including the settlement of the status
of the Kah Tai property with the City of Port Townsend in 2013. His portfolio of
Port projects expanded and he helped write the Port’s Capital Repair and
Replacement Plan in 2015 among other duties.
During the 2016 turnover of Port administration, Toews was hired on as staff
with a focus on environmental compliance efforts, project management, and inhouse
legal counsel duties.
Upon the departure of Executive Director Sam Gibboney in mid-August 2018,
the Commissioners turned to Toews as Acting Director. On behalf of the
Commission, he enlisted Jim Pivarnik, the Port’s former longtime Deputy
Director, to step in as Interim Executive Director. Toews worked alongside
Pivarnik to stabilize port operations and finances.
Toews’ administrative experience became especially important with the recent
departure of Greg Englin, the Director of Operations. Last week, Pivarnik
obtained approval from the Port Commission to name Toews as Deputy
Director. Along with Director of Finance Abigail Berg, they have divvied up
management of the Port’s many challenges between them.
Most ports have other revenue streams – greater tax revenues or revenues from
terminal facilities – to maintain facilities and fund operations, Toews said. But
the Port of Port Townsend has a slender tax base and does not have a shipping
terminal. Instead it must rely largely on rents from leases and moorage fees to
maintain the facilities that support many community businesses, including the
vibrant marine trades sector and the world’s largest oyster growing operation.
“The tax base is small,” he said. “So, it mostly comes down to rents and fees.”
The Port is doing all it can to tighten its own belt toward efficient operation. But
that also means Toews’ plate is full. His project list includes the runway rebuild
at the Jefferson County International Airport, the Point Hudson south jetty, Boat
Haven stormwater system improvements, updating environmental best
management practices, and leases – to name a few.
But Toews is committed to doing whatever it takes.
“I know that for the trades to be successful, the Port must be successful,” he said.