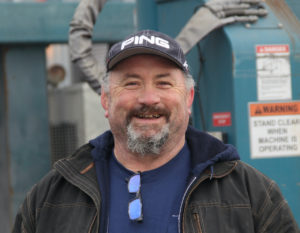 Over the course of 34 years and the tenure of eight different executive directors, Terry Khile has been one of the Steady-Eddies at the Port of Port Townsend.

Khile is retiring from his most recent assignment as Operations Manager, in charge of all marinas and yards. But he has done just about every job at the Port since 1988, when he started walking the docks as a moorage attendant just two years out of high school.

He has worked the marinas, been a laborer in the yard, driven first the smaller and then the largest of the Travelifts that carry boats, helped launch environment compliance programs, run the Point Hudson Marina, been the yard boss and finally Operations Manager, a post he held for the last four years.

Over that time the dangerous work has put him in the hospital three times with torn shoulders and a knee injury. But he’s always come back. Thanks to his football build, his work ethic, and his ability to manage tense situations, throughout his tenure he was frequently asked to deal with unruly customers (or non-customers) both on land and on the water.

In that role, he said he’s seen a lot of things: Fistfights, knives brought to meetings, squatters in abandoned boats, a body, vandals abusing the restrooms, death threats, and more.

Before Khile graduated from Port Townsend High school in 1986, he was a star on the wrestling and football teams. He spent a couple years after high school doing commercial fishing in Alaska, but when back in Port Townsend he also got jobs as a swimming pool lifeguard and at Harper Shell, stringing three jobs together and working 12-hour days.

It was from Harper Shell (now the Safeway gas station) that Khile was introduced to Port facilities. At the time Harper ran the marina fuel dock (now the Fishin’ Hole). His girlfriend, Amy Wilson, was a dock attendant and Khile got to know boaters walking the docks with her.

Amy and Terry were married in 1992. Amy Khile is now the business manager for Port Townsend Schools. The couple has twin sons, Keegan and Austin, now 24 years old.

Khile’s responsibilities steadily grew at the Port, including as an operator of the 70-ton Travelifts, until in 1997 when the Port purchased its huge 300-ton Travelift. Khile and Doug Lockhart were assigned to be the first operators.

A serious injury took Khile off the lift and he considered changing careers altogether. But Port leaders urged him to stay on. He became one of the early Environmental Compliance officers, charged with introducing and enforcing environmental work practices on and off the water.

Khile is proud that extensive surface work and other improvements, with contaminants down to the parts per billion monitored by the state Department of Ecology, have allowed the 19-acre Port boat yard to stay open. “That was a huge accomplishment,” he said.

His subsequent jobs, as assistant harbormaster and yard boss led to his appointment as operations manager in 2018, where he has managed over a dozen Port employees.

Khile has also been active in the community. He’s been both a little league and high school football coach, helped with the wrestling and golf teams, a member of the Elks and volunteered to help with service clubs doing crab or fish feeds.

What he hasn’t done in his spare time – until recently – was own and use a boat.

“I told Doug Lockhart that if I ever wanted to buy a boat, he should kick me,” he joked. But he now owns an aluminum fishing boat and is looking for something a little larger.

Khile seems happy to be making the shift from someone responsible for the boats to someone using one.