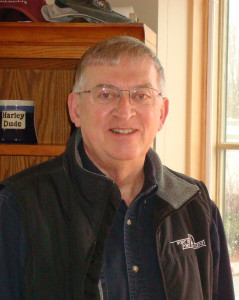 Larry Crockett, the Port of Port Townsend’s Executive Director since 1999, has announced his retirement from the Port, effective June 1, 2016.

Larry Crockett has served as the Executive Director of the Port of Port Townsend, since April of 1999. Born in Presque Isle, Maine, Mr. Crockett earned a Bachelor’s Degree at Cornell, University in Ithaca New York and a Master’s Degree at Florida Institute of Technology, in Melbourne Florida.

Crockett served 30 years in the United States Army, retiring in February 1999 as a full Colonel. While in service he attended numerous schools including the Command and General Staff College and Industrial College of the Armed Forces. He has commanded at all levels and is a decorated combat veteran.

“The thing I miss most about the military was the fact that in 30 years of service, I felt that I was part of something larger than myself,” said Crockett. “I never thought I would get that feeling again after retiring. But I found that again at the Port of Port Townsend.”

“The time is right for me to step away. We have a stable Commission in place, current Port projects are well in hand, and we have sufficient time before the next budget cycle begins. This is a window of opportunity that I hope will allow the Port to move forward with minimal impact. I’ll be 69 this summer, and I have some other adventures I want to try while I am still in good health.”

Commission President Peter Hanke noted that Crockett’s tenure was highly successful. “When Larry was hired in 1999, the Port couldn’t pay its bills, and had to secure a line of credit just to meet cashflow. He and his staff have done an outstanding job of placing the Port on sound financial footing, which enables more than 400 marine trades jobs to flourish in an environment where other Ports are struggling.”

Hanke says that the Commission will begin discussions on a process to replace Crockett immediately. “The Port Commissioners are committed to exploring all options in hiring a new Executive Director, and we look forward to beginning that process in earnest.”

The Port’s Executive Director is responsible for all operations and lease negotiations with over 175 tenants/businesses, leading a staff of 26 people that oversees operations of three marinas, boat yards, industrial parks and the Jefferson County International Airport.