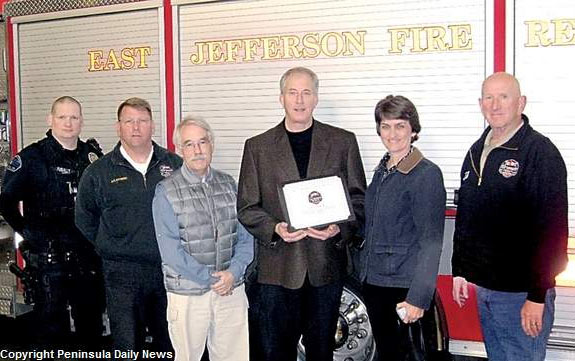 East Jefferson Fire-Rescue commissioners presented Port of Port Townsend employee Pete Parrish with a certificate of appreciation for putting out a fire during this year’s Wooden Boat Festival.

Parrish was recognized at the commissioners’ Wednesday meeting for putting out a fire he discovered in the early morning hours of Sept. 7, the last day of the three-day festival, said Bill Beezley, department spokesman.

At about 2:30 a.m., while Parrish was on patrol at Point Hudson Marina and RV Park, he saw smoke and 4-foot flames coming from a bucket below a fryer in the Kokopelli Grill vendor tent, Beezley said.

He rushed back to his patrol vehicle, grabbed a dry chemical fire extinguisher and put out the blaze before calling 9-1-1.

He suffered smoke inhalation, for which he was later treated.