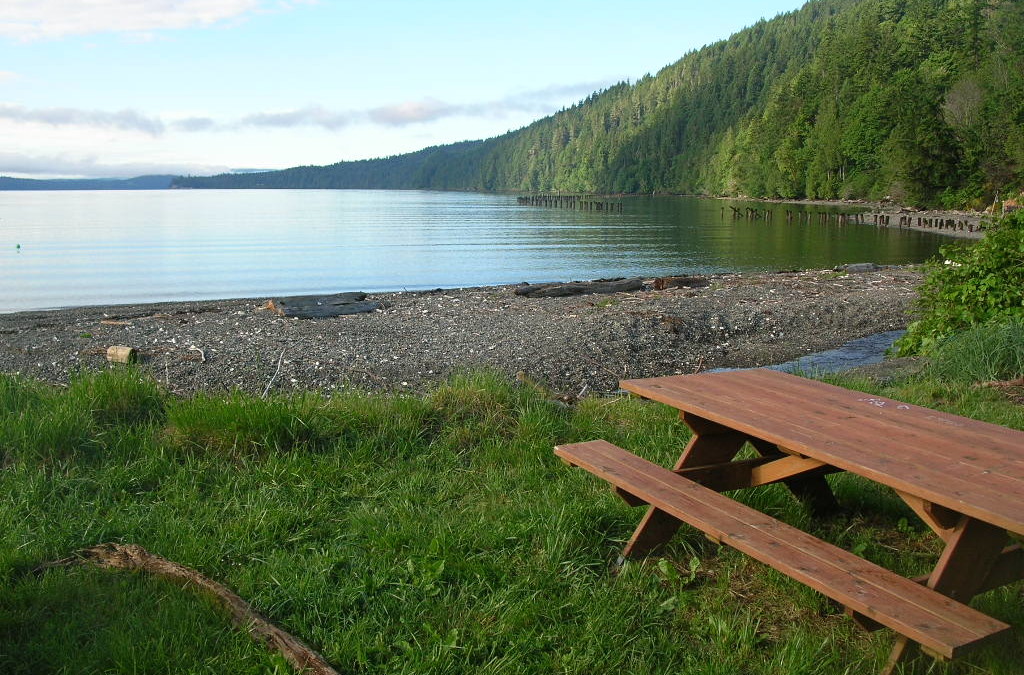 Commissioner Tucker called the meeting to order at 6:00 PM.

B. Resolution No. 614-14 – Authorizing Sale of Abandoned Vessels

Electronic Debit to Union Bank in the amount of $9,400.82 for Washington State

Combined Excise Tax Return for May 2014

Commissioner Tucker moved to approve the Consent Agenda as presented.

Stanley Nealey reported Quilcene had their third annual beach party for end of school year and thanked the Port for constructing the swim float.

J.D. Gallant asked if there would be a discussion on the recent Quilcene facility tour.

Mr. Crockett informed that bids for the AWOS equipment and installation were opened yesterday. All Weather bid $81+K and Vaisala, Inc. bid $85+K. Both were responsible bidders, but Vaisala was nonresponsive as they failed to acknowledge the addendum that was included in the bid documents. The project will be awarded to All Weather, the low bidder, being both responsible and responsive. Mr. Crockett reminded this is a portion of the overall project cost of around $300K. PUD, concrete, trenching are other parts of the project. He reminded the Port was awarded the WSDOT Aviation grant at 5%, and with the FAA’s grant at 90%, the Port will be responsible for 5% of the total cost, totaling about $16K. Bill Putney is working with the FCC. Projected date of installation is late August or early September.

A schedule was presented on the 2015 Operating Budget & Capital Improvement Plan. Mr. Crockett pointed out the Port is required to hold one Public Hearing but has two scheduled, if needed. He added the first draft operating budget is scheduled for September and reminded the Commission to begin thinking about property taxes, rates & fees and suggests rates & fees be discussed at the next public workshop. He discussed the recent facility tours and explained Maintenance Manager, Larry Aase, would develop a 3-year maintenance plan. Mr. Crockett informed the Port collects $58K from Quilcene property tax payers and could apply $60K per year towards Quilcene for the next three years. He said once the maintenance plan is presented, the commission will need to prioritize.

Commissioner Tucker stated he would like to hear ideas form Quilcene citizens on how to use the $60K.

Commissioner Hanke explained the docks and boat ramp in Quilcene are issues.

Linda Herzog feels since the Port is the only entity who can stimulate economic development, she would like to see citizens bring forward to the Commission ideas on stimulating economic development in Quilcene, and investing some of the Quilcene money into Quilcene’s future.

Mr. Crockett reported this was discussed at the WPPA Spring conference. The attached Mutual Aid Interlocal Agreement explains the process.

Attorney Lake added once a port has signed up, it is on a voluntary basis to respond to an emergency. She then explained the benefits of having the shared formalized agreement.

Commissioner Clinefelter said he sees no liability and believes it is a good agreement to have the ability to help other ports, as well as receive assistance here if needed during emergencies. He feels there is no reason not to sign on.

Commissioner Tucker stated this would be included on the next meeting agenda.

Mr. Crockett briefed on Coast & Harbor Engineer’s Scope of Work, a copy distributed to the Commission. This contract is design to 35% completion at a cost of $114,800.

Mr. Pivarnik explained that engineering work in this phase will take us through permitting and design of the actual structure and the project should be ready to bid after the first of the year. Construction targeted to begin during the fish window of 2016.

Commissioner Tucker reminded of the rules that were adopted by the commission in resolution form pertaining to the first and second reading. He believes this agenda item should not be populated under Immediate Action and feels this was already validated when the Commission authorized staff to move forward with the grant for the boat ramp expansion.

Mr. Crockett briefed on the presentation by the Peninsula Trails Coalition (PTC) during Public Comment at the last commission meeting. He stated it was not clear to the commission that the PTC was submitting a grant to RCO, with a July 1, 2014 due date. The Port/PTC MOU is a piece of that application packet. Mr. Crockett submitted the PTC MOUs (City and Port) to the Port Attorney for review, which is still in process. Discussion ensued on details of the MOU.

Jeff Selby, PTC rep, explained an option is to bring the trail up along the bluff via Haines Street but that is in the future. He stated the RCO grant amount applied for is $70K, which also includes two trail projects in Clallam County. The amount earmarked for the Port Townsend trail is $20K.

Attorney Lake added that RCO grants require the funded project to be open for public use for at least 25 years. This would prevent the Port from being able to use this space for boats.

Commissioner Tucker stated he likes the idea of the trailhead but parking is the issue. He asked the PTC should consider submitting an RCO grant for moving the trail to the bluff. He said the Port would be happy to work on this plan with the PTC and the City.

Mr. Crockett reminded that years ago the Port gave money towards the construction of the Park & Ride area to deter trail traffic out of the boatyard.

Commissioner Clinefelter asked if the PTC’s plans to paint the restroom would further hamper future available boat space. Ms. Lake replied that any portion of a project funded with RCO money is to be open to the public for 25 years.

Mr. Crockett said the Port could possibly dedicate land outside of the shipyard along the bluff for trail use.

Consensus from the Commission was that they could not approve the MOU.

Commissioner Tucker reiterated that the Port would be happy to meet with the PTC and the City to come up with other plans.

Mr. Pivarnik reported on the successful emergency repair of the Point Hudson Marina breakwater. He informed it was completed in five hours at a cost somewhere between $52-54K.

He also announced he attended the talk at the Northwest Maritime Center on the Chatham Anchor, which was well attended.

Mr. Crockett explained he met this morning with different Port Townsend representatives who have interest in sharing booth space with the Port at the 2015 Seattle Boat Show. He also stated he is attending the PRTPO TAC meeting in Port Hadlock tomorrow.

J.D. Gallant expressed his thoughts on the Quilcene budget. He believes money should be set aside for re-dredging of the marina, which will be needed in another 4-5 years. He also would like to meet with Commissioner Hanke, Larry Aase and Jim Speer to get ideas for a Quilcene maintenance . He said he understands Ms. Herzog’s idea of using money for economic development but he does not want to see the marina neglected. He explained many people use the beach and marina in Quilcene and they are good for Quilcene’s economy. He thanked the Commission and staff for this meeting.

Herb Beck said on the subject of economic development, he would like to see the Port help in establishing a community kitchen in Quilcene. He discussed the growing market for agricultural products and the need for people to have a place to prepare their products for market.

Jerry Johnson spoke in favor of a commercial kitchen.

Ron Hayes thanked the commission and staff for time invested on the engineering and grant process for the boat ramp expansion. This means a lot to small boaters and the second ramp will be good for Port Townsend’s economy.

Mike Whittaker asked questions on Quilcene tax money the Port receives and where that money is earmarked.

Mr. Crockett reported the Port has put in over $1M in the Quilcene Marina in the past seven years. He also agrees with Mr. Gallant that the Port does need to establish a process for Quilcene maintenance.

Linda Herzog agrees with the idea of a commercial kitchen in Quilcene. She also asked if staff could add to the Quilcene maintenance plan, the removal of the Quilcene swim float from the water prior to winter, to prevent further barnacle growth. She also thanked the Commission for coming to Quilcene.

Commissioner Hanke reported he recently attended a Fort Worden Advisory Committee meeting. He said the new PDA is taking advantage of grant monies for projects such as the docks, sewer, the sloping bank by the Port’s stairs and a new maintenance shop. He said the PDA reservation counts are almost up to par.

Commissioner Hanke would also like the Commission to hold a meeting again in Quilcene in September.

Commissioner Tucker reported the Jefferson Energy Lunch was canceled this month to do a controversial energy topic.

He also reported on a successful project recently conducted on retrieving derelict crab pots from Port Townsend Bay. Sponsors were the Marine Resources Committee (MRC) and Dept. of Fish & Wildlife.

Lastly, Commissioner Tucker commented on the recent talk on the Chatham’s anchor at the Maritime Center, which he also attended. He wasn’t aware the Port had so much to do with this project until the Port was thanked at the talk for hauling out the anchor, building the water box for the anchor, and helping to coordinate transportation of the anchor.

XI. NEXT MEETING/PUBLIC WORKSHOP: Next regular meeting will be held Wednesday, July 9, 2014 at 1:00 PM, with a Public Workshop preceding at 9:30 AM in the Port Commission Building, 333 Benedict St, Port Townsend.

The regular session recessed into Executive Session, at 7:26 PM for a Real Estate matter and Potential Litigation, duration of twenty minutes with no action, pursuant to RCW 42.30.110 (b) (i).

The Executive Session formally began at 7:32 PM, once the room cleared of audience members.

At 7:46 PM, Ms. Nelson checked outside for waiting members of the public. Finding no one, the session continued.

At 7:52 PM, the session was extended another ten minutes. Ms. Nelson checked outside, again, finding no one.

AT 8:04 PM, the session was extended another five minutes. Ms. Nelson informed one waiting member of the public of the extension.

The meeting reconvened and adjourned at 8:10 PM, there being no further action to come before the Commission.