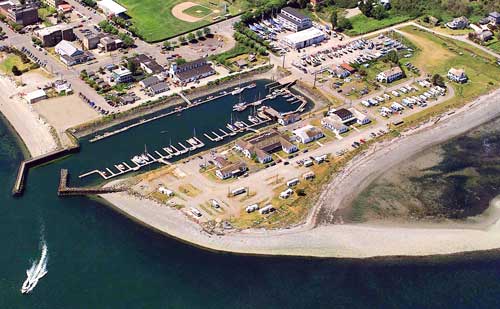 Added to Executive Session: Item B) Litigation, pursuant to RCW 42.30.110 (i). No action will be taken, with total session duration of twenty minutes.

Commissioner Hanke moved to approve the Consent Agenda as presented.

Mr. Crockett reminded this was discussed at the previous commission meeting. The agreement provides clarity and form for emergency assistance between ports, and allows for reimbursement of services provided. He recommends moving forward, with the Port Attorney drafting an agreement for signature by the Executive Director.

Commissioner Tucker moved to approve a Mutual Aid Agreement to be drafted by the Port Attorney.

Mr. Crockett recommends approval of the Coast & Harbor Engineering contract, Phase 2, of the Point Hudson Breakwater design. He explained this will enable the engineers to provide the drawings to begin the permitting process.

Commissioner Clinefelter requested that the Commissioners be provided with updates on the “Tasks” written in the contract.

Mr. Cairns provided a briefing to the Commission on the shipyard resurfacing project, sited at the west end of the shipyard, an approximate area of 100’ x 465’. Contractors were notified of the project and two businesses attended the July 8, 2014 mandatory pre-bid meeting. Mr. Cairns estimates the contract will not exceed $40K. (The Port is paying disposal costs.) Bids are due Monday, July 14, 2014.

Mr. Crockett discussed an email recently from an independent contractor on a parking issue with a tenant of the Port. The particular tenant put up eight “Employee Parking Only” signs in front of his business, eliminating parking for others. He explained few Port tenants have actual parking spaces in their leases. He added the Executive Director does have the authority to establish as many parking spaces as required for safe and effective operations of the Port. Mr. Crockett explained staff does not see this as a large problem, and sees it more as an issue between the two parties involved. However, he added, if the Commission has any solutions to bring their ideas forward.

Commissioner Clinefelter remarked that no trailer boaters have used the newly cleared out space for additional parking along the fence line.

Commissioner Tucker explained this is the first year the Port has provided this additional parking area. It was done to accommodate the crab and salmon openings. Next year, it may only open for the salmon openers since it was not needed during the crab opener.

Attorney Lake apologized for her late arrival and acknowledged the Mutual Aid Agreement approved by the Commission.

Mr. Pivarnik informed the request for bids for the AWOS site prep will go out this Friday.

Mr. Crockett announced he and Mr. Pivarnik met with Keven Elliff and the new Port website should be launched this Friday. With guidance from him and Mr. Pivarnik, Mr. Elliff is writing three articles for the news section of the website.

He informed he and staff will meet with Dan Taylor of the Teamsters Union on July 23 for meeting #1 on Union contract negotiations.

Lastly, he announced he is leaving today for the WPPA Director’s Conference in Bellingham.

Commissioner Clinefelter asked what it would take to develop a long-term maintenance schedule. Mr. Crockett replied it will be folded in with the 2015 budget process.

Commissioner Tucker informed that he and other volunteers form the fishing club counted boats during the crab openings and found that the overflow parking was not needed. He said they will count again on July 16, which is salmon opening.

The regular session recessed into Executive Session, at 1:34 PM for two Real Estate matters and a Litigation issue, duration of twenty minutes with no action, pursuant to RCW 42.30.110 (b) (i).

At 1:55 PM, Ms. Nelson checked outside for waiting members of the public. Finding no one, the session continued and was extended five minutes.

The meeting reconvened and adjourned at 1:57 PM, there being no further action to come before the Commission.