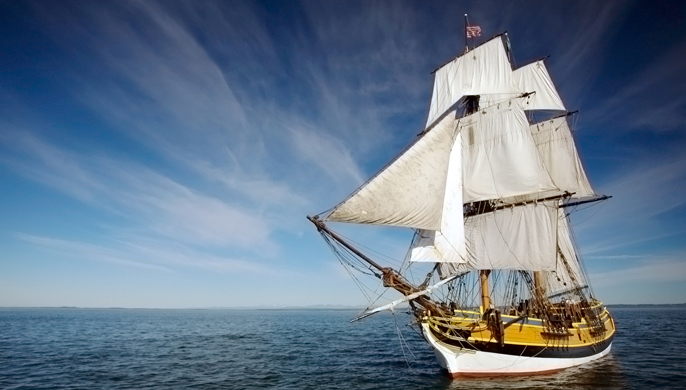 One of the most prominent tall ships in operation is spending its down time in the Port Townsend Boat Haven this week.  After appearing at the Wooden Boat Festival earlier this month, the Lady Washington was hauled out of the water for maintenance and repairs aimed at refurbishing the propeller and repainting the hull, according to Capt. Ken Lazarus.

Launched in 1989 as part of the Washington centennial celebrations, Lady Washington was designed by Ray Wallace as a replica of one of the first U.S. flagged vessels to explore the west coast of North America. The original Lady Washington was built in the 1750s near Boston and sailed around Cape Horn in 1788 to trade furs with the First Nations peoples of Vancouver Island.

The modern version is 112 feet long overall, 22 feet wide, and her main mast rises 89 feet from the water. The ship was named the state’s tall-ship ambassador by the Legislature in 2007 and sails to more than 40 ports a year in Washington, Oregon and California. The ship, based in Aberdeen, has appeared in several movies, including “Pirates of the Caribbean: The Curse of the Black Pearl” in 2003.

Get the full story and photos at the Peninsula Daily News.