FROM THE PORT OF PORT TOWNSEND

Matt Klontz, 42, who grew up in Port Townsend, is joining the Port of Port Townsend starting Nov. 1 as its new Director of Capital Projects and Chief Engineer.

Klontz is departing his job as City Engineer and Public Works Director for the city of Sequim to take the Port job being vacated by Mike Love. “Matt Is a great fit for the Port team,” said Berg, “It’s hard to Imagine a better fit than an experienced engineer and project manager who grew up right here In Port Townsend coming back home to apply his expertise and experience at the Port.”

For the last six years as Sequim’s City Engineer, Klontz has brought his civil engineering skills to a wide variety of projects, including roads, water, sewer, parks and public facilities. Earlier this year he was also named the city’s director of Public Works.

Before that, Klontz worked as an engineer on huge construction projects that included the new Tacoma Narrows Bridge and Washington State highways. In the late 2000s he was transferred to Southern California to work on freeways, light rail and the expansion of the John Wayne Airport in Orange County.

But he and his wife Chiarra – also a Port Townsend graduate – decided they wanted to raise their family in a small town, so looked back toward home. He joined the Jefferson County Public Works Department for several years before being hired by Sequim. They live just outside of Port Townsend.

It’s been a good move, he said.

“For the first decade of my career it was all mega projects,” said Klontz “Once the concrete set I was off to the next project. I was never there to see how it benefited the community. But at Sequim I could see the benefit and get to know the community. Projects that were small and simple like fixing a sidewalk became some of the most rewarding projects because I knew the impact it had on people for the better.”

At the top of his list for the Port are the rebuild of the breakwater jetties for the Point Hudson Marina. While dates are fluid, Klontz is hopeful permits will be issued, funding contracts approved and the project will be underway a year from now in the fall of 2022. He will also take the lead role with the Port’s stormwater system at the Boat Haven, among many other things.

“I’m excited about it,” Klontz said of his new role. “It’s a really good fit for who I am as a person and an engineer. Even when I landed in Sequim there was a backlog of projects, and they needed someone with a knack for delivering those. That’s something I’ve always been proud of: delivering projects, getting things done.”

Klontz’s parents moved to Port Townsend from Olympia in 1986. He went through the entire school system, graduating from Port Townsend High School in 1998. He was a star basketball player, but also ran track and worked for four years on the high school annual.

Attending Washington State University, he said he rediscovered his love for math and was a good fit for the engineering department, graduating with a Bachelor of Science degree. That’s when he started working some of Western Washington’s biggest projects like the Tacoma Narrows Bridge.

Klontz returned to college to obtain a Masters in Construction Management in 2009, this time from the University of Washington.

He and Chiarra have two sons, Silas, 13, and Arlo, 10, both of whom attend local schools. Chiarra works at Salish Coast Elementary School.

“My hope, when I land at the Port, is to have the same contact with the community, the working boatyard and the tenants, to make improvements that benefit them and the Port, now and into the future.”

Mike Love, whom Klontz replaces, was hired in October 2020 after serving as assistant director of Mount Vernon’s Public Works Department. 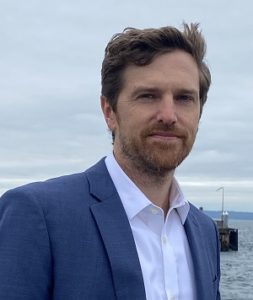