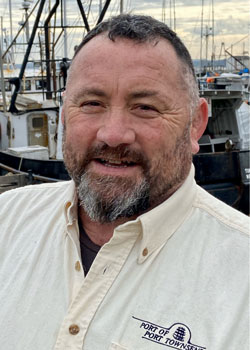 Port Townsend native Terry Khile, 53, has been named the new operations manager for the Port of Port Townsend.

Khile replaces T.J. Quandt, the business manager who departed early this year for a similar job with the Port of Olympia. But Khile’s responsibilities have been expanded to include oversight of the operations of all Port facilities.

That includes its three marinas, its upland shipyard and the Jefferson County International Airport.

“This is a great move for the Port and for Terry,” said Executive Director Jim Pivarnik. “Terry knows the operations of the Port forwards and backwards. He’s held just about every job here over his almost 32 years at the Port.”

Khile acknowledged that he’s busy in his new post, which gives him oversight of 17 Port employees.

“There is zero lag time,” he said. “If I’m not getting something done, I’m falling behind.”

But Khile, who was a Port Townsend High School football star prior to his 1986 graduation, has broad shoulders and said he’s undaunted.

He grew up around boats and boat-building.

His father, Ron Khile, had a boatbuilding shop at Radon Marine and later with Skookum Marine in Port Townsend. Terry recalled working perhaps from the age of 10 doing cleanup work around his dad’s boat shop.

In his early 20s, his first job at the Port was walking and checking the docks. He became a laborer in the shipyard, then learned how to operate the boat hoists which, by 1997, included the huge 300-ton hoist.

For five years until 2012, he was the Port’s environmental compliance officer, putting him in charge of managing and monitoring wastes to prevent pollution of coastal waters. He became assistant harbormaster, then hoist and yard manager.

“There are always finer points that need attention,” he said, especially with upcoming capital improvements at the marinas and the airports.

Khile and his wife Amy, also a Port Townsend native, raised their twin sons here, Keegan and Austin, now 22. Khile has also been an assistant football coach at PTHS.

In other Port news: