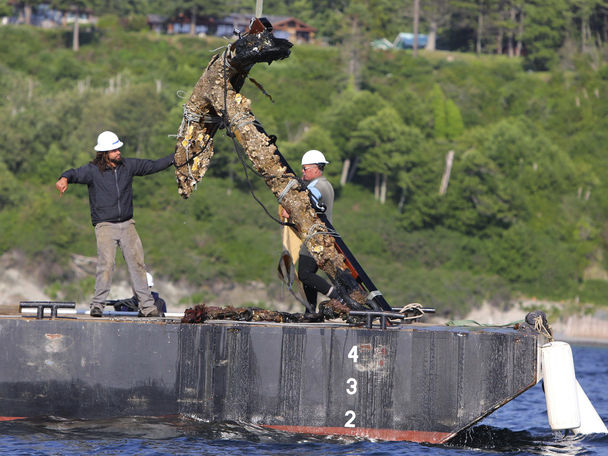 News outlets, including the Peninsula Daily News, are covering the intriguing possibility that divers may have recovered the long lost anchor from Capt. George Vancouver’s HMS Discovery expedition. That expedition brought the first white settlements to the area.

“An anchor found six years ago by Port Angeles diver Doug Monk is being held in water at the Northwest Maritime Center as it awaits a trip to Texas to see whether it was from one of the earliest ships to sail in the Pacific Northwest. “Now we just have to prove we’re right,” said Scott Grimm, who is half of Anchor Ventures LLC. Grimm and Monk led an expedition Monday to retrieve the anchor from Admiralty Inlet off the coast of Whidbey Island. They brought it back Monday night and anchored it overnight off a pier at the Port of Port Townsend’s Boat Haven.It was pulled up Tuesday afternoon and taken to the maritime center at 431 Water St., where it will be displayed for the next few weeks in a wood and fiberglass crate made by port workers. “It’s important to keep it underwater as much as we can,” Grimm said. “The more air gets to it, the more the chances that something might happen to it.” Eventually, the anchor will be moved to Texas A&M University in College Station, Texas, where Monk and Grimm hope researchers will be able to prove the anchor’s age and settle a longstanding historical dispute. Monk and Grimm believe the anchor is the one that logs from Capt. George Vancouver’s HMS Discovery expedition say broke free in the early morning hours of June 6, 1792. “