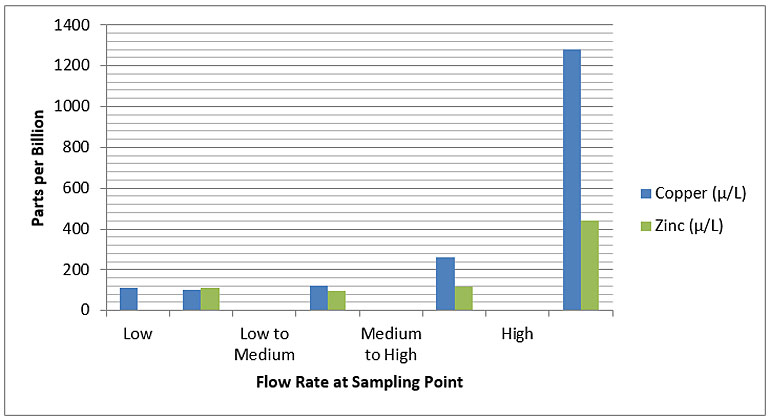 Over the course of 2015, the Port has been sampling the Boat Haven’s stormwater discharge into Port Townsend Bay. The results of the sampling at Boat Haven’s single outfall point in the Spring of 2015 were highly variable. It appears that in heavier rainfall conditions, the existing sediments in the stormwater system’s catch basins and settling vaults were being conveyed to the outfall pipe, producing Copper and Zinc quantities – measured in parts per billion or micrograms per liter (µ/L) – that exceeded the facility’s permit from the State Department of Ecology. (The permit “benchmarks” for Copper and Zinc are included in the table for reference).

For this reason, the Port recently completed a total cleaning of the 60 catch basins and 4 vaults that comprise the stormwater system. Our hope – shared by the Department of Ecology – is that removal of the sediments from these basins and vaults will improve the Copper and Zinc levels significantly.

To date, only one representative sample has been obtained since the cleaning project, given that tide ranges make sampling with each rain event impossible. This single sample from October 7, 2015 was during a low flow event and so it cannot be taken to represent the full effect – good or bad – of the system cleaning project or of other system improvements made in 2014 and 2015.

When we are able to sample under higher flow rates over several rain events, we will then be able to determine if more work will need to be done so that our stormwater quality meets the permit benchmarks.